By Martha McCaughey on September 4, 2016

Congratulations on being an amazing Internet meme. How’d you do it? You stand for a great cause–GreenPeace wanted to make people more aware of the whales that were threatened in Japan–and you emerged as the people’s choice for icons in this movement. 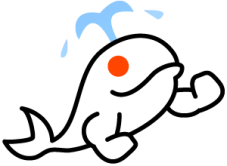 But you were the underdog (underwhale?  underwear?).  Most of the names for the representative whale were serious, symbolic, ethereal names like Anahi and Kaimana.  And yet you prevailed, because GreenPeace left it up to a vote over social media.  When you won, GreenPeace pulled the old “we’re going to keep the contest open a while longer” trick, at which point your supporters only became more emboldened, determined to see their beloved Mr. Splashy Pants the name of the GreenPeace whale.

That’s why we’re writing you for advice, Mr. Pants, in hopes that we could make the kind of splash on social media that you have.  We’ve blogged serious stuff. We’ve blogged silly stuff.  We’ve submitted a video in response to the one that the CDC did.  We just don’t have your supporters or your success.  But we know, Splashy, that you understand the importance of self-preservation, and fighting back against those who would perpetrate violence.  We know you get it, Splashy.

Please write with any suggestions as to contests &etc.  Thank you.