The White House tapped the University of New Hampshire’s bystander intervention program, Prevention Innovations, as a model for sexual assault prevention at the national level. Chances are you have or are adopting that comprehensive bystander intervention program or one very similar to it. UNH’s program trains individuals not only to identify dangerous or potentially dangerous situations, but how to intervene actively and safely. A second leg of that program is a social marketing campaign, which includes posters, bus wraps, and buttons that show realistic situations and potential bystander responses. 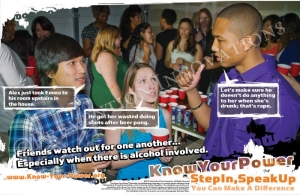 This social marketing campaign centers on a “Know Your Power®” theme. This community-mobilization approach enlists men as allies in the struggle to stop rape by telling them how powerful they are. Similar to the old campaign that placed in men’s restroom urinals stickers that read, “You’re holding the power to stop rape in your hands,” the “Know Your Power” campaign tells men they have the power not to rape.

Women apparently can train as bystanders alongside men, and thus, at least in theory, have the power to intervene as a bystander in select situations and in particular ways. Sadly, though, nothing in these campaign materials suggests that there is anything the woman targeted for assault can do, in the moment, to stop the assault.

And that’s simply not true. Women are, and can be, enormously powerful. Resisting sexual assault is a viable option. It can work. It does work. Women can do it, men can do it, kids can do it. Of equal importance, women gain a sense of empowerment when learning self-defense. We want to emphasize that the research shows that women need to know their power. Women have the power (and the legal right) to fight back.

Of course, stressing self-defense is never a reason to let men or society or the university off the hook for ending rape culture. Indeed, if more men thought more of their campus coeds knew how to break their arm, we’re pretty sure they wouldn’t feel off the hook.

But it does work, and we should also be telling those stories. Sexual assault awareness and prevention materials must include stories of thwarted assaults, not just completed ones. If our stories consist exclusively of bystanders saving victims, we teach everyone that once an assault is in progress (because not all bystanders will intervene, and not every assault has a bystander), there is nothing that can be done to stop it. And that’s not necessarily or always true.

Hence, we recommend that all campuses offer self-defense training as an option and, importantly, that colleges and universities frame this as part of their mission to fulfill the federal mandate to educate all new college students in sexual assault prevention. Not all students might want to take self-defense training, and that is fine. But without self-defense as part of the sexual assault prevention and education efforts on campus, we are telling women that they are to rely on concerned bystanders, university policies, and the law for protection against acquaintance, date, and party rape. We might as well tell women, We’re here for you, we’re creating knights in shining armor to come rescue you—and if they don’t, princesses, it’s gonna happen.